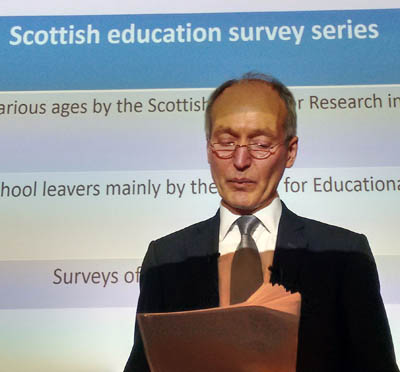 There was a great response to the lecture in honour of Professor David Raffe, chaired by Professor Rowena Arshad OBE (above) and delivered by Professor Lindsay Paterson, with over 125 people squeezing into the venue. David, in his roles as Professor of Sociology of Education at the University of Edinburgh and Director of its Centre for Educational Sociology, made an immense contribution to educational research in the UK and internationally over a 40 year period. His work was underpinned by a belief that “in a democratic society research provides a means by which the public can call the government to account”. Professor Paterson’s lecture will consider the extent to which researchers are able to scrutinise current educational policies in Scotland and contribute to public debate.

Prof Paterson’s talk can be viewed in the video player below, or the text and slides can be viewed or downloaded here as a pdf (the slides are at the end of the pdf).  The event was held on 26 March at the Outreach Centre, 9c Holyrood Road, University of Edinburgh, EH8 8FP.

Scotland pioneered the use of high-quality social surveys in education. It led the world in the use of statistics as a means of understanding what students learn and how their learning relates to their social context and opportunities. That distinctive history attracted international admiration, and was sustained to the end of the twentieth century as a highly creative though often tense partnership among government, school teachers, and academic researchers. The prospect of a Scottish parliament at the end of the century seemed to open up new opportunities by which statistical data might be used to inform more open debate about policy. Yet now, two decades after the parliament was established, Scotland has a dearth of the kind of statistical information that might be used in public discussion. The position is now worse than at any time since the 1950s. There is much measurement but little enlightenment. The lecture considers the achievements of the Scottish history of using statistical evidence in educational debate, explains the decline in recent years, and outlines what would have to change for educational policy-making once again to be grounded in sound statistical evidence.

Lindsay Paterson is Professor of Educational Policy in the School of Social and Political Science, University of Edinburgh. His main academic interests are in education, civic engagement and political attitudes. He has degrees in mathematics and in statistics, and is part of the Q-Step Centre at Edinburgh University, the aim of which is to strengthen the extent and depth of undergraduate statistical understanding in the social sciences. He has contributed to many debates in Scotland since the early 1990s on the impact of education policies, and on the importance of policy implementation in achieving or modifying the aims of policy-makers. He is a Fellow of the British Academy and a Fellow of the Royal Society of Edinburgh.

Video of the Q&A can be viewed here: